This is a text widget, which allows you to add text or HTML to your sidebar. You can use them to display text, links, images, HTML, or a combination of these. Edit them in the Widget section of the Customizer.

One of the key steps in forming a Community Choice Aggregation program is the Joint Powers Authority (JPA) agreement that participating cities and counties sign to formalize their nonprofit partnership.

On December 15 in the presentation theatre of the South Bay Cities Council of Governments in Torrance, we held our 2nd meeting of the SBCP Advisory Committee with members attending both in person and on-line to review the details of the draft JPA our Working Group had submitted to cities to form a South Bay Clean Power CCA 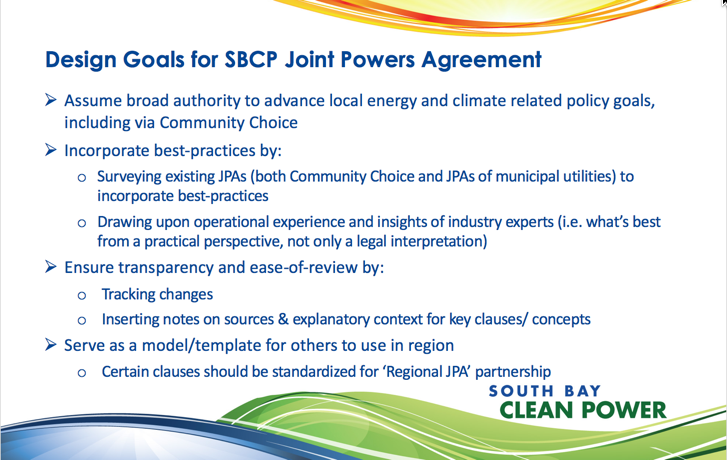 The SBCP JPA draft was based on review of other CCAs Joint Power Authority agreements and selected the best elements for the South Bay Clean Power effort.

END_OF_DOCUMENT_TOKEN_TO_BE_REPLACED

Posted on December 16, 2016 by creativegreenius

A far more inclusive and interactive approach and execution was evident at this meeting – in marked contrast to the previous year-long CCA task force meetings in which there were no tasks, no committees and no action items for participants to engage in.  In this first meeting under Gero’s direction, a professional facilitator was employed and breakout sessions allowed for full participation by all attending.

END_OF_DOCUMENT_TOKEN_TO_BE_REPLACED

Posted on December 12, 2016 by creativegreenius 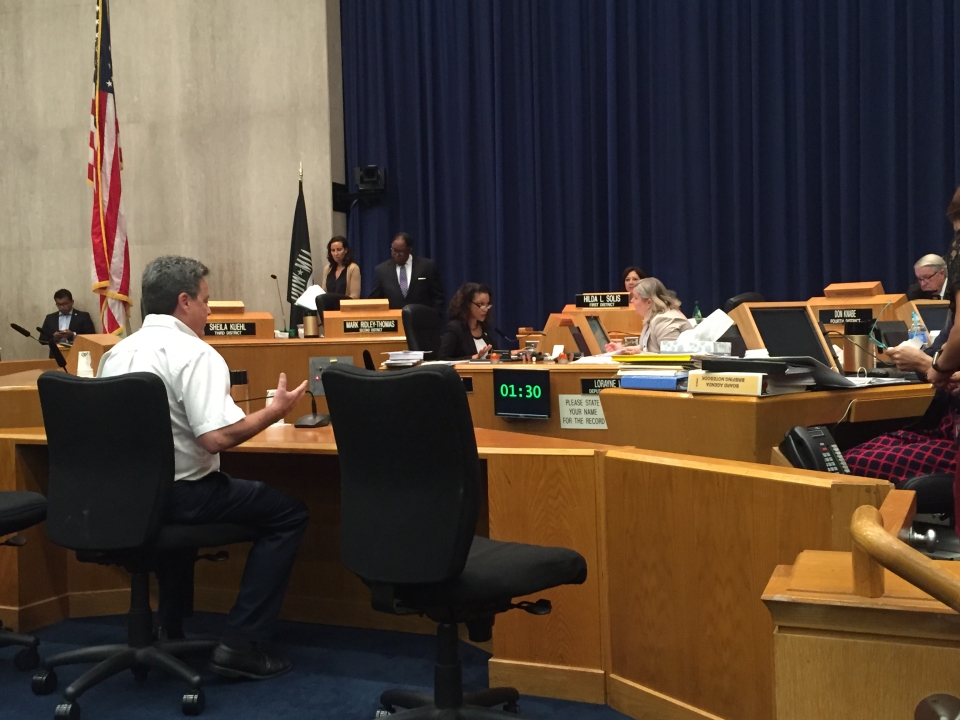 We’ll have the complete story for you tomorrow including video of the outstanding and supportive comments made by Supervisors Don Knabe, Sheila Kuehl, Mark Ridley-Thomas and Hilda Solis.

We’ll also have the public remarks made by the Sierra Club, the International Brotherhood of Electrical Workers Local 11, Food and Water Watch and others.

We are exceptionally grateful to our CCA Champions Knabe and Kuehl and to their all star staffs!

Posted on September 27, 2016 by creativegreenius

Thanks to the diligence, perseverance and responsiveness of Los Angeles County Supervisors Don Knabe and Sheila Kuehl and their staffs, our comments and recommendations on the Los Angeles County Community Choice Energy Business Plan were considered and addressed by this new motion being introduced at the LA County Board of Supervisors meeting on Tuesday, September 27, 2016. 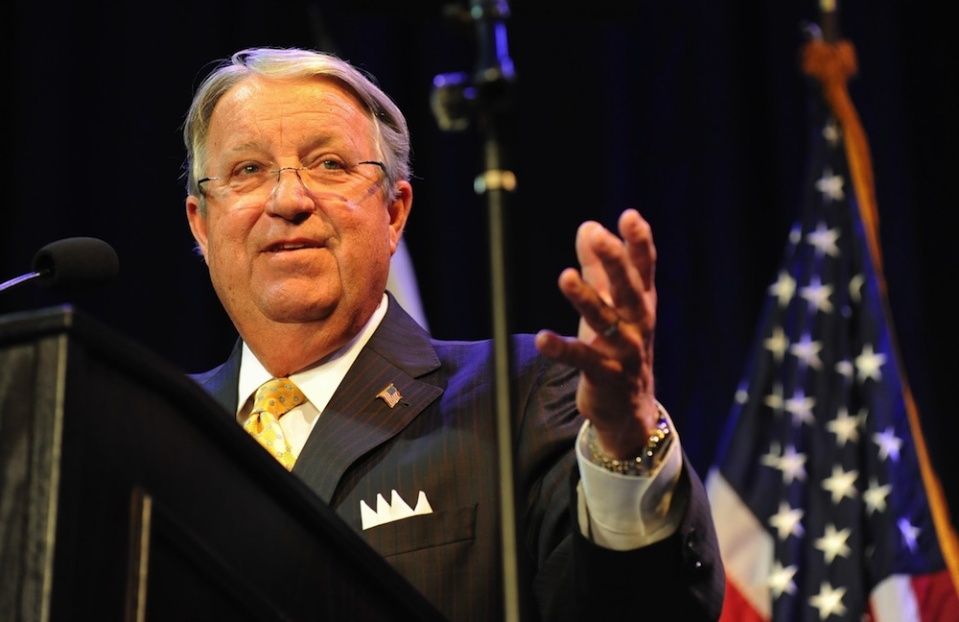 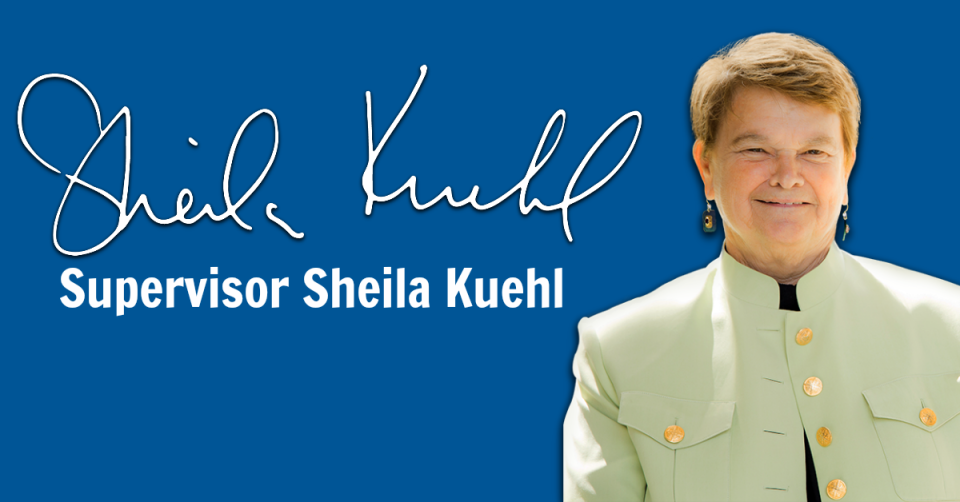 We are deeply appreciative that South Bay Clean Power’s formal response, comments and recommendations report was so thoroughly considered and addressed by this new motion by Supervisors Knabe and Kuehl along with the supporting responses to the LACCE Business Plan also submitted by the Sierra Club, by the International Brotherhood of Electricians Local 11 along with the Los Angeles Chapter of the National Electrical Contractors Association, by GRID Alternatives and by Food & Water Watch.

We are especially pleased that the next steps in LA County’s Community Choice program development will be under the able direction of the CEO of the County and will be assisted by the new LA County Chief Officer of Sustainability (still to be hired) and the County Counsel. Our only disappointment is with the continued involvement of ISD who we believe did an inadequate job on their last assignment on this project.

You’ll find the motion here on the September 27, 2016 agenda. Some of what the motion says, after the break –  END_OF_DOCUMENT_TOKEN_TO_BE_REPLACED

Posted on September 22, 2016 by creativegreenius

The consultants hired by L.A. County’s Internal Service Department to produce a Los Angeles County Community Choice Energy Business Plan have done so and we found it thoroughly disappointing and a failure to deliver on the Board of Supervisors direction.

On this day we have delivered our formal response comments and recommendations to the proposed plan and as you will read we found much to be lacking in the work by the consultants who were hired without a request for proposals process and without having any viable experience in producing a CCA business plan before. 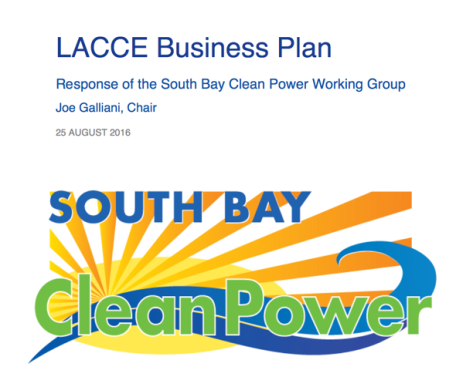 Here is an excerpt from our cover letter in our response document:

Unfortunately, this process has fallen short of the above objectives. In general, stakeholders and municipalities were kept at “arms-length”. This stands sharply in contrast to CCA launch efforts in other jurisdictions that have adhered to a much higher level of transparency and stakeholder engagement. As a result, the Business Plan:

END_OF_DOCUMENT_TOKEN_TO_BE_REPLACED

Posted on August 25, 2016 by creativegreenius